What Separates Me from You 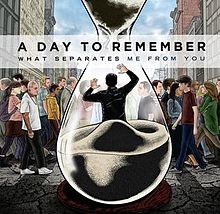 What Separates Me from You is the fourth studio album by American metalcore/pop punk band A Day to Remember, and their third for Victory. Originally planned for release in late-October 2010, the album was delayed by a few weeks until mid-November. The album, which was recorded mainly at The Wade Studios in Ocala, Florida, from May to July 2010, was the first to feature guitarist Kevin Skaff. The album was produced mostly by Chad Gilbert, with help from Andrew Wade and the band’s singer, Jeremy McKinnon. “All I Want” was released as the first single. It reached number 12 on the U.S. Alternative Songs chart and number 25 on the Rock Songs chart.

The album debuted on the U.S. Billboard 200 at number 11, and number 1 on several charts: Top Hard Rock Albums, Top Independent Albums, Top Modern Rock/Alternative Albums in the U.S. and the Rock Album Chart in the UK. The band played two songs from the album on the their national TV debut in January 2011, and then went on The Game Changers Tour to help promote the album; shortly afterwards touring worldwide in support of the release. Two later singles off the album charted: “All Signs Point to Lauderdale”, released in June, reached number 32 on the Hot Modern Rock Tracks chart, and radio single “It’s Complicated”, released in October, peaked at number 34 on the same chart. What Separates Me from You was met with generally favorable reviews, with critics praising the album’s sound.