And Their Name Was Treason 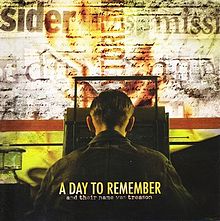 And Their Name Was Treason is the debut studio album by American metalcore band A Day to Remember, released on May 10, 2005 through Indianola Records. It followed their self-released EP, which was produced the previous year. The album was the band’s only release under Indianola; its success led the group sign to Victory Records. Several songs on the album were written during the band members’ teenage years. Recorded in the producer’s bedroom, the album contains audio excerpts from several films.

The band toured in the United States to help promote the album. The album has since sold over 10,000 copies. A re-recorded version of the album, titled Old Record, was released in October 2008 by Victory. The band members later admitted that they were forced to do the re-recording at the request of label owner Tony Brummel. The reissue charted at number 16 on the Heatseekers Album Chart in the U.S.